skip to main | skip to sidebar

I fully endorse these Chinese farmers

Check out the link for a spectacular display of incredibly dangerous "lava painting".
Posted by Justin Webb at 11:51 AM 36 comments:

The Only Thing Left at Circuit City ...

Dan Enright and I popped into the Circuit City in Fairfax on Saturday during the last few hours of their liquidation sale ... and the pickings were slim.

Apart from fixtures, there really wasn't anything left in the store at all. No TVs. No Stereos. No DVD players. No real hardware of any sort.

There was a handful of crappy Rap CDs for a dollar, and a few cables here and there, but no DVDs, video games, or software. It was kind of like the Cheese Shop from the old Monty Python sketch.

Then we noticed an endcap that seemed to actually have something to buy on it. 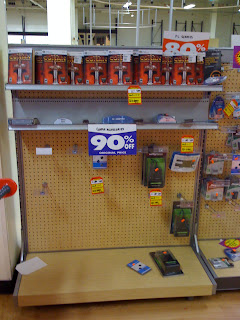 Angie and I thought it would be interesting to see what Paul Barnett gets up to when he's not at work, so we grabbed a video camera and ... err ... broke into his house.

The video footage is disturbing
Posted by Justin Webb at 7:09 AM 1 comment:

I'm doing a pre-launch blog over at Ten Ton Hammer. Those guys rock!

Before you do not taste this video ...

So I was having a look at the link stats for the video I put up where we win Best Online Game at Leipzig, and noticed that a couple of French sites were linking to it: mondewarhammer.com; and mondespersistants.com.

Both of them used the same following text (I've taken out the accents):

Now, its been about 20 years since I scraped through my French GCSE with a "C" grade, so I'm pretty rusty, but I think that the two web sites in question actually think my real name is Elvish Parsley.
Posted by Justin Webb at 4:59 PM 6 comments:

As you've probably heard, EA picked up a bunch of awards at Leipzig GC.
Here's Paul and Jeff picking up the award for Best Online Game. Of course they did it in their own glorious manic way.
It's a bit longer than most of the other videos I've posted here, but it gives a pretty good behind-the-scenes look at the EA lounge and the award presentation.
Plus there is dancing.
Here's the link to the Youtube vid.
Posted by Justin Webb at 4:29 PM 5 comments:

Justin Goes to Leipzig - The Kate-apult

As you probably know, Warhammer Online has a fantastic Realm vs Realm (RvR) combat system. Part of that system involves storming enemy keeps and fortresses in an attempt to control zones to push the campaign farther toward your enemy's capital city. Each race has access to its own unique set of siege weaponry: ballistas, bolt-throwers, battering rams, boiling oil, etc.
At a typical Con, we give out boxes and boxes of T-Shirts and schwag to fans who come to see our presentations. However, throwing T-shirts is hard. So, we locked a bunch of interns in a room and whipped them until they came up with a solution. Luckily, most of our interns spend copious amounts of time playing on beta. Before their welts become completely scabrous, they came up with an idea for a new T-shirt Delivery System (TDS).
To the untrained eye, the TDS looks like an enormous hand catapult.
Deputy Content Manager Kate Flack manned (womaned?) the TDS, or "Kate-apult", at Leipzig with fantastic results. Using the device, she could deliver a T-shirt to any person in the main hall within a matter of seconds - often by knocking them unconscious.
Here's a Youtube link.
Also, as you can see, most of the front-row fans are wearing spiffing WAR white sunglasses. Make sure you grab a pair off Paul or Jeff at PAX this weekend.
So to clarify, during Saturday's presentation, no convention spotlights were destroyed by the TDS. If you attended Leipzig GC on Saturday and found small crystalline shards in your hair afterwards, those shards were definitely not bits of glass. Perhaps you have developed a new form of disgusting Con dandruff
Posted by Justin Webb at 5:20 PM No comments:

Justin Webb
An irreverent behind-the-scenes look into the video game industry from an insider's point of view. I recently survived the launch of Warhammer Online: Age of Reckoning! Waaagh! And now make MMOs at Tencent Boston.